Test Units were placed to sample areas that had shown the highest artifact densities during the Phase IB testing, thus maximizing the chance of encountering cultural features. Identified features were delineated, photographed, and mapped in planview. Features were bisected along their longest axis and excavated by natural internal stratigraphy. If an internal stratum was substantial, it was subdivided into 10-cm levels arbitrary levels so as to establish greater control over the sampling of the deposit. The feature matrix was screened through 1/4-inch wire mesh. A portion of the feature matrix was retained as a soil sample for flotation or use in other analyses, such as starch, phytolith, or pollen.

Once excavation was completed, the recovered artifacts were processed and cataloged in the same manner as was done for the Phase IB survey. The resultant information was then used to assess the sites and determine if it had research potential, and/or integrity as these things are necessary to classify something as eligible for inclusion in the NRHP. Of the 9 sites AECOM investigated to the Phase II level, seven were recommended as not eligible for listing on the NRHP while the remaining two sites - the Unami Creek Open Site (36BU0445) and Split Site East (36BU0449) were recommended eligible for the NRHP (Table 2). Sites were recommended not eligible because they either lacked depositional integrity, possessed no cultural features, had a low artifact density, and/or possessed a limited number of diagnostic artifacts. Of these factors, the lack of integrity and features was often the determining factor. While some sites, like the Spring Run Rockshelter, may have produced a moderate quantity and variety of material, the absence of an intact interpretable context, or feature association, meant that the informational potential of that area was limited and therefore could not contribute significant information to the prehistory of the region. No further investigation of these sites was recommended. Phase III Data Recovery investigations were recommended for the two NRHP eligible sites. 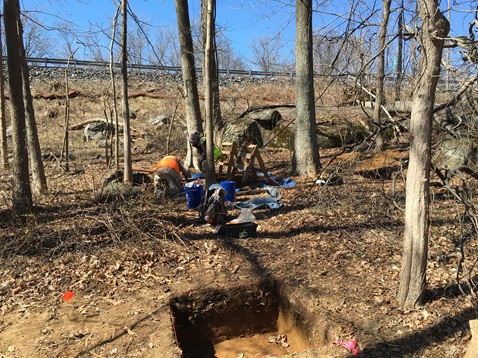 Photo 3. Phase II excavations on the East side of the Split Site (36BU0449), view west, with the PTNE visible in the background. 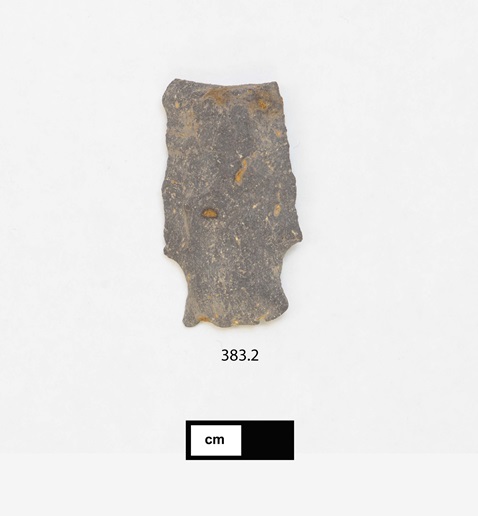 ** Although the landowner originally informed project archaeologists that he had collected diagnostic tool forms from 36BU0453, upon further conversation with Mr. Lederer, it was apparent that he was uncertain which of the artifacts in his collection actually came from this site. Consequently, the temporal placement of the site remains uncertain.

The two sites that were recommended eligible for the NRHP, the Unami Creek Open Site (36BU0445) and Split Site East (36BU0449), were both recommended eligible because they were determined to exhibit depositional integrity, contained cultural features, displayed temporally diagnostic artifacts, and contained moderate to high artifact counts.

The Phase II excavations of the Unami Creek Open site consisted of the excavation of twenty-five 1x1-meter TUs which in total produced 5,090 artifacts. Of the total number of artifacts recovered 92% of the materials (n=4,687) were pre-contact artifacts. While half of the all artifacts were recovered from disturbed plowzone contexts, the remainder came from intact soil deposits in the southern portion of the site where an approximately 40x40-meter intact living surface was found, and a hearth feature (Feature 1) was identified.

Initial interpretation of the site, based on diagnostic projectile points and radiocarbon dating, suggest that the site had been occupied during the Late Archaic to Early Woodland Periods (3700-2600 B.P.), the Middle Woodland Period (2000-1700 B.P.) and the Late Woodland Period (1300-465 B.P.). Over half (n=10) of the temporally diagnostic projectile points identified during the Phase II excavations pertained to the Late Woodland period and were identified as triangle points. The next most numerous point type was Fox Creek which is a style dating to the late Middle Woodland period. The importance of the Woodland Period date was further highlighted by the living surface and the associated Feature 1â€”the single most significant depositional context at the siteâ€”which produced both Fox Creek (n=1) and Late Woodland triangular projectile points (n=3), as well as a Late Woodland period C14 date (510-400 B.P.). Based on this evidence and the eligibility of this site, AECOM recommended avoidance of the site, or Phase III Data Recovery mitigation, if avoidance was not possible. The PTC took this recommendation under advisement and revised the construction APE so that a much smaller portion of the site was affected by construction activities, leaving the remainder of the site essentially preserved in place. For the area where effects from construction could not be avoided, the PTC made arrangements to mitigate the effect via a Phase III archaeological data recovery. 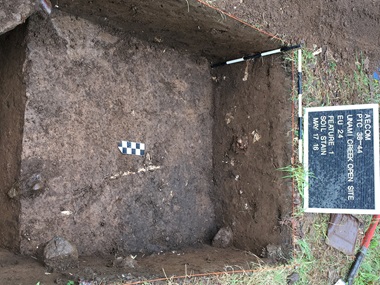 The Phase II evaluation of the east side of the Split Site to assess its eligibility for inclusion in the NRHP was conducted in March 2016. Investigations began with the excavation of radial STPs at 5-m intervals around each positive STP. This was done to better define the site area and determine optimal locations for TU placement. Of the 32 radial STPs excavated, 20 were positive for precontact material. The radial STPs produced a total of 91 artifacts, including 86 precontact artifacts (79 flakes, two scraper tools, one pitted cobble tool, one uni-directional core, three pieces of FCR), and five historic artifacts (four redware and one creamware). With the now more-refined site area, eighteen TUs were laid out on a 10-meter interval grid over the entire site area, allowing for some variance to avoid large diabase boulders. Excavation of these 18 test units showed that the site had an intact natural soil profile. This excavation also identified Feature 1, a precontact burnt-earth/hearth feature. Overlying this feature a fishtail-type (Late Archaic to Early Woodland) projectile point was found. This diagnostic artifact, in combination with two stemmed projectile pointsâ€”also attributed to the Late Archaic-Early Woodland period, found elsewhere on the site served as indicators about the time period that the site was occupied.

In total, the Phase I-II excavations at the Split Site East produced 1,150 artifacts, including 959 precontact and 191 historic artifacts. The historic artifacts recovered are most likely associated with the nineteenth-century farmstead that stood just to the west until demolished during the initial construction of the Turnpike. While prehistoric artifacts counts were lower at Split Site East, relative to the Unami Creek Site, the depositional integrity and presence of features were sufficient to meet the NRHP eligibility criteria for the site eligible. Additionally, this site falls within a corridor of rockshelters along the Ridge Valley Creek and Unami Creek. The PTC determined that avoidance of this site could not be achieved through changes to the project design so a Phase III data recovery plan was drafted for the site to guide the subsequent mitigation effort.