The Phase IB archaeological field investigations were conducted between October 2014 and August 2015. Shovel test pits (STPs) were plotted at 15-meter (49.2-foot) intervals across the entirety of the testable area of potential effects (APE). All STPs were excavated by natural stratigraphic levels (soil levels) to a maximum depth of 1 meter (3.3 feet) or until culturally sterile subsoil was reached. All soils were screened through 1/4-inch hardware cloth to maintain uniform artifact recovery and maintain comparable datasets. All cultural materials greater than 50 years of age were retained. If an excavated STP produced either precontact artifacts or historic artifacts 50 years of age or older, additional radial STPs were excavated at 5-meter intervals on the four cardinal directions surrounding that test. These additional tests were dug in order to better define the horizontal extent of any archaeological resources identified. The stratigraphy (relative position of soil layers) of each STP was recorded on standardized forms with information regarding soil color and texture, as well as the artifacts associated with each soil horizon.

Recovered artifacts were processed at the AECOM laboratory in Burlington, New Jersey. Processing included cleaning (washing or dry-brushing, as appropriate) and cataloging of all artifacts. The catalog includes descriptive information for each artifact, noting its cultural affiliation, function, dimensions, material, decoration, and date range of manufacture when known. This catalog information was utilized to analyze the identified sites and make recommendations about the need for additional investigations.

Photo 1. AECOM archaeologists digging shovel tests in the yard of a historic house. 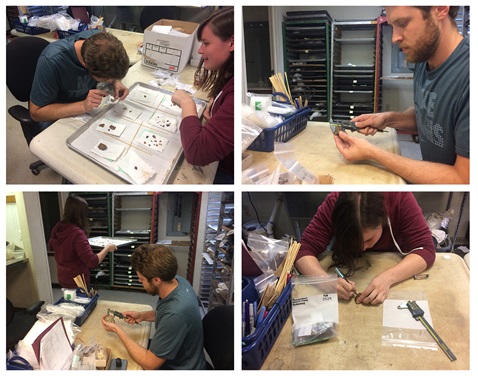 Photo 2. Artifacts being analyzed, measured, and labeled with provenience information.

The Phase IB investigations for the PTC Northeastern Extension (I-476) A-38 to A-44 project resulted in the excavation of 1,887 STPs across the APE and the recovery of over 900 precontact and historic artifacts. Precontact sites are those related to human occupations prior to European contact, and historic sites are those that date to the period after European contact. This effort identified a total of 13 sites within the APE (Table 1). Archaeological sites are most often determined eligible for inclusion on the NRHP, based on Criterion D. Criterion D is applicable in situations where the material remains, i.e. archaeological deposits, have the potential to contribute significant knowledge about the past and answer research questions ( National Park Service: National Register Bulletin).

Of the 13 sites, one site (36BU0041) had previously been reported on a PASS form as having been destroyed, which was confirmed in the current survey. Three of the identified sites were recommended as not eligible for listing on the NRHP due to their limited informational potential and poor depositional context. The remaining nine sites, both precontact and historic, were determined to exhibit characteristics that would suggest the potential to contain information that would lead to a recommendation of NRHP eligibility, and further archaeological investigation was recommended if project engineers were unable to find alternatives to avoid effects to the archaeological resources.