Home About Us PA Turnpike History

An unbroken ribbon of concrete cutting through mountains and across valleys, bypassing towns. No stop signs, no intersections, no need to worry.

The PA Turnpike was the first of its kind and received nationwide acclaim as an engineering marvel. It was touted as America’s First Superhighway when it opened on October 1, 1940, and was the national standard for superhighway design and engineering.

Today, the PA Turnpike stretches more than 550 miles – triple its original length. It continues its legacy of innovation in the ground-transportation industry and embraces modern-day technologies for faster response times, increased traffic flow, and safer trips for drivers.

Explore how the PA Turnpike has progressed over the decades.

Look into the Past

Explore the photo gallery to see the past and present of the PA Turnpike side-by-side. 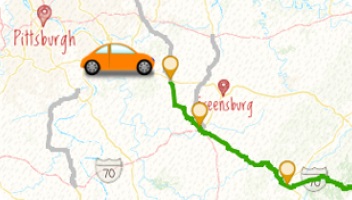 Explore the interactive map of PA Turnpike milestones and points of interest.

In the late 1700s, Pennsylvanians traveled by horse and carriage over log-surfaced roads and muddy terrain. By the 1800’s, they could travel across Pennsylvania by railroads and canals. As early as 1910, ideas arose to convert an abandoned railway route into a motorway. The idea of a turnpike to cross the Alleghenies was supported by the trucking industry as well as the motoring public.

It included two-lane tunnels, but the rapidly increasing traffic volumes soon made the two-lane tunnels obsolete and prompted consideration of by-passing or "double tunneling" the seven original tunnels. In addition to reducing travel time between Pittsburgh and Harrisburg by three hours, the PA Turnpike created an economic boom to areas along its path.

The expansion project from Carlisle to Valley Forge opened on November 20, 1950, and ushered in a new decade of expansion. Extensions from Irwin to the Ohio Line and from Valley Forge to New Jersey soon followed. But the Northeastern Extension, from Montgomery County in the south to Scranton in the north, was the longest of the expansion projects crossing some 110 miles.

The opening of the Northeastern Extension would be the last such groundbreaking for an expansion project until August 20, 1989.

Although the PA Turnpike was one of the safest in the country, the need for more safety improvements became apparent in response to a rising number of crashes. Improvements included better pavement drainage and stabilization, a 300-foot right-of-way, a 60-foot median, computerized Toll Points, plazas moved back away from the road, and curves added to the boring, straight stretches.

By the early 1960's, a study of the traffic bottleneck at the two tunnels was undertaken and it recommended a 13.1 mile bypass that included reconstruction and relocation of the Breezewood Interchange and construction of a new east-west service plaza (Sideling Hill). The Sideling Hill By-pass opened on November 26, 1968, sending both the Ray's Hill and Sideling Hill tunnels into retirement. Portions of the vacated highway and the tunnels themselves still exist today and are used by the PA Turnpike for testing and research.

In 1970, a plan was developed that involved updating the PA Turnpike’s original roadway through the Allegheny Mountains. This would be a road for the future, with the biggest part of the plan to include two lanes for cars and two lanes for trucks on both sides of the roadway.

Some sections of the new PA Turnpike would be 10 lanes wide. This new roadway would have an 80-mph speed limit and holographic roadway signs. It would even have an electronic computer system that would warn people of icy roads. However, due to the high cost of the $1.1 billion dollar project, repeated disruptions in the flow of imported oil, and a 55 mph national speed limit that would make an 80 mph highway an extravagance, a compromise was written that would only cost $356 million. The revised plan would upgrade the most heavily traveled areas to eight lanes with a 70-mph speed limit.

In 1985, the state legislature passed Act 61 which legislated that the Pennsylvania Turnpike Commission complete route 60. The bill also assigned the Mon Fayette Expressway to the PA Turnpike.

On the existing PA Turnpike, changes were being made. Truck climbing lanes were added; interchanges were renovated and expanded, emergency call boxes were installed along the highway and service plaza locations and food offerings were modified.

The toll system was computerized and would use a 2”x 5” ticket with a magnetic strip containing fare information. The system weighed all vehicles passing through toll lanes. The last remaining two-lane tunnel on the PA Turnpike was the Lehigh Tunnel on the Northeastern Extension and it was widened. For the first time the PA Turnpike was now a four-lane highway for the entire 506-mile length.

On October 31, 1989, the PA Turnpike saw its two billionth traveler.

The first spades of earth were turned on PA Turnpike 60, the James E. Ross Highway in Beaver County, launching the 1990s as the next decade of expansion. It was the first major PA Turnpike expansion since the construction of the Northeastern Extension in 1958.

The Mon Fayette Expressway – California Toll Road, designated as PA Turnpike 43, opened in 1990 and the PA Turnpike broke ground on two additional segments of the expressway system: I-68 to PA Route 43 and the I-70 to PA Route 51 projects.

The Northeastern Extension was also upgraded in the 1990s, including the widening of the Lehigh Tunnel on November 22, 1991.

The original PA Turnpike was now 50 years old and needed to be rebuilt. This began in 1998 and targeted a section between mileposts 94 and 99 near Somerset County. Reconstruction work continued eastward on mileposts 76 to 85 and mileposts 187 to 197. Emergency call boxes were made available across the entire PA Turnpike System.

By the 21st century the original 160-mile route had expanded to 514 miles. The decade from 2000-2010 saw an increase in the use of intelligent devices to monitor the roadway and travel conditions. Roadway cameras, a highway advisory radio system, a truck rollover and height alert system, fog detection system, a traffic flow detection system, and weather stations were put in place along the PA Turnpike. The PA Turnpike Commission started its public information program, TRIP, which alerted the public to travel conditions via web, phone, email, and text messages.

The 2000s saw the opening of the 7.8-mile “Mason-Dixon” link connecting Pennsylvania and West Virginia, further advancing the Mon/Fayette Expressway system. Two more segments of the expressway would open in the 2000’s, the I-70 to PA Route 51 project as well as the Phase 1 portion of the Uniontown to Brownsville project. A six-mile project from PA Route 60 to US Route 22, also known as the Findlay Connector or I-576, opened on October 11, 2006. It would be the first of three independent but interconnected projects that make up the Southern Beltway.

In stages, throughout the decade, E-ZPass was implemented across the PA Turnpike. The PTC upgraded service plazas with new parking lots, lighting, sanitary and wastewater treatment facilities, and renovated dining rooms.

The 2010s saw the advancement of two projects, Phase 2 of the Mon/Fayette Expressway – Uniontown to Brownsville Project and the groundbreaking for the second section of the Southern Beltway, the U.S. Route 22 to I-79 project. Reconstruction across the PA Turnpike continued and the roadway saw new grading, new drainage systems, new pavement, new guide rails, and a new median widened to 18 feet. Larger shoulders allowed easier access for emergency vehicles. Environmental awareness expanded. The original concrete from highway reconstruction was recycled to provide a base for the new highway. The main administration building’s electrical needs were purchased from wind-generated power facilities.

Tolling of I-80, discussed in Act 44, was rejected by the Federal Highway Administration. Funding for the PA Turnpike and all Pennsylvania transportation funding needed to be re-evaluated and restructured. As part of an ongoing effort to modernize, the PA Turnpike began a pilot program to test All-Electronic Tolling (AET) at several locations across the system. AET would allow for a cashless tolling system across the PA Turnpike. With the success of the pilot programs, it was announced that the entire system would convert to AET in October 2021.

As 2020 began, the country was aware of a new virus making its way to the United States. By March, the rapid transmission of a novel coronavirus, or COVID-19, led health and government officials to take unprecedented steps to slow the spread. As states realized the magnitude of the COVID-19 pandemic many, including Pennsylvania, issued a Stay at Home Order directing all residents to shelter at home and limit movements outside of their homes beyond essential needs. Many businesses were closed and employees who could work from home were instructed to do so. Toll Collectors were now at risk of being exposed to the virus while performing their jobs. The PA Turnpike decided to cease cash collections to protect employees and customers and on March 16, 2020, converted to All-Electronic Tolling (AET). The original intent was to honor the AET conversion planned for October 2021 and return to a cash system collection system after the pandemic. No one could have known the magnitude of the epidemic. PA Turnpike traffic plummeted by almost 50% by the end of May and revenues dropped by more than $100 million. On June 2, 2020, the PA Turnpike announced that it would permanently remain in AET. It was evident that returning to a cash collection system was too risky. Several factors influenced the landmark decision. With drivers now accustomed to traveling through Toll Points without stopping, going back to a cash system would be dangerous for drivers and toll collectors. If a collector were to test positive for the virus, the interchange would shut down leaving a gap in the ticket/cash system and the PA Turnpike could not operate under those circumstances.

As Pennsylvania residents began to look forward to the Stay at Home restrictions being lifted in a phased approach, it was reported that the virus might return later in 2020. The PA Turnpike continues to take a phased, deliberate approach to offset revenue loss that offered a degree of flexibility to adapt depending on the crisis’ duration.

2020 would be the first time in the history of the PA Turnpike that toll collectors would not be staffing Toll Points to receive cash payments at the customers' exit point. 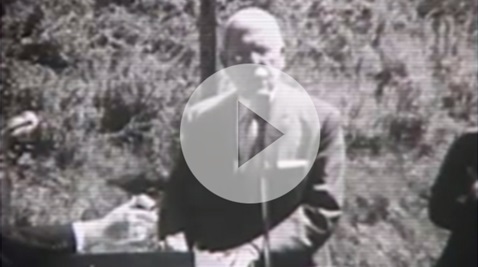 A three minute video of PA Turnpike images over the years. 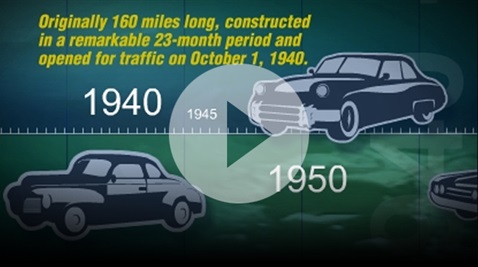 Pennsylvania Turnpike, I Love You

PA Turnpike Timeline featuring the song “Pennsylvania Turnpike, I Love You,” composed by Vaughn Horton in the late 1970s.

A brief documentary on the history and construction of the PA Turnpike.