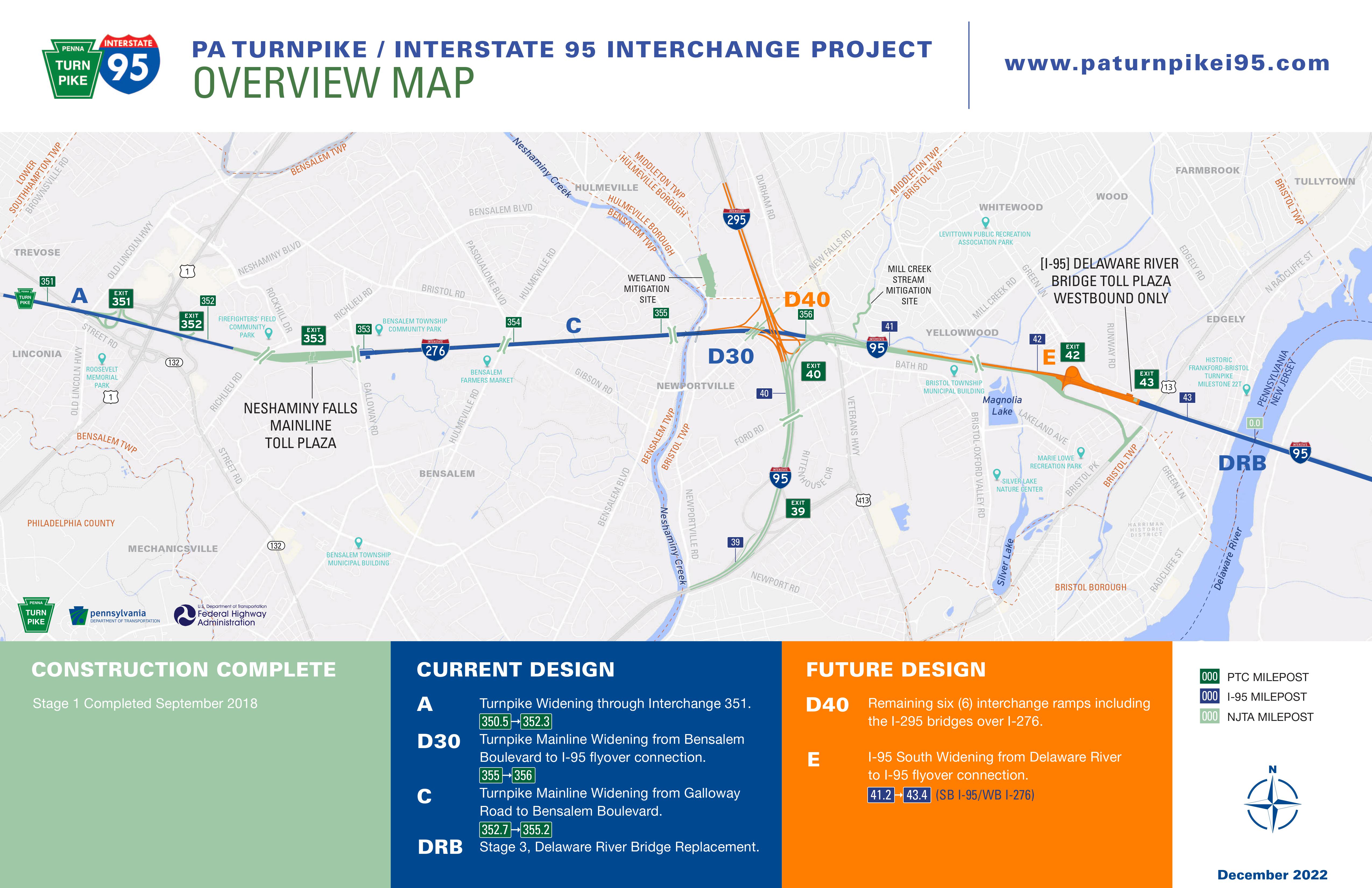 The Pennsylvania Turnpike/Interstate 95 Interchange Project now directly connects these two highways. One of the goals of this project is to reduce congestion on local Bucks County roadways as well as improve the flow of traffic in the Philadelphia region and along the entire east coast.

This website will inform the public with timely and accurate construction information to improve travel while using the Pennsylvania Turnpike and Interstate 95 in the Bucks County area.

Keeping the public informed of construction activities will enable safe and expeditious travel through the construction zones.

For additional information on this project, including the latest design information, please click on the appropriate links in the menu at the top.

Preliminary Design Phase Completed in 2008. Final Design and Construction activities for Stage 1 elements will proceed through 2021. The schedule of construction for Stage 2 and Stage 3 elements is largely dependent on funding.
Find out more about construction here. 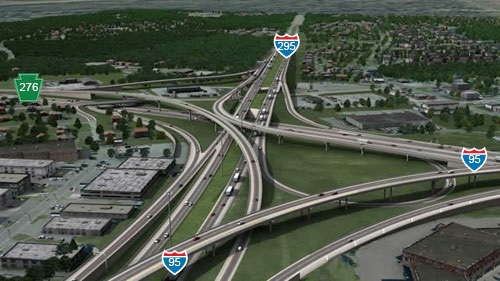 In 1969, Interstate 95 was completed without a direct connection to the Pennsylvania Turnpike, which had been constructed more than 10 years prior. The lack of a direct connection has created confusion for regional travelers, and resulted in increased congestion on local arterial roadways used by motorists to connect between the interstate highways.

Several previous studies in the 1970s and 80s have suggested ways to join these two roads but were discontinued for a variety of engineering and environmental reasons. The goal of the latest environmental impact study, completed in 2003, was to determine whether a direct connection could be developed between the PA Turnpike and I-95, while minimizing impacts on socioeconomic and environmental resources.

The objectives for the Interchange Project:

2004
The PA Turnpike Commission receives authorization of federal funds for the project's design. Design for the interchange project is initiated.

1992-2003
PA Turnpike Commission studied a high-speed, direct interchange between the PA Turnpike and I-95. The Final Environmental Impact Statement (FEIS) is completed, evaluating the various design alternatives and their potential impacts and documenting the preferred alternative. The Record of Decision (ROD) is issued by the U.S. Department of Transportation's Federal Highway Administration (FHWA), approving the preferred alternative identified in the FEIS. Download the Record of Decision.

1984-1988
PA Turnpike Commission studies a slow-speed, conventional interchange between the PA Turnpike and I-95 (see map, Scheme B). Engineers conclude this interchange is inadequate once updated traffic volumes are generated for the project.

1985
PA Act 61 authorizes the PA Turnpike Commission to construct many projects throughout the state including an interchange between the PA Turnpike and I-95 in lower Bucks County and Turnpike widening from Valley Forge to the Delaware River.

1982
The Federal Surface Transportation Assistance Act specifies that I-95 be completed through a PA Turnpike/I-95 interchange which would connect to the NJ Turnpike using the Delaware River Bridge.

1975-1977
PA Department of Transportation (PennDOT) studies a connection between PA Turnpike and I-95 through Silver Lake and Delhaas Woods in Bristol. No further studies are conducted due to potential major environmental impacts.

1969
I-95 is completed through Bucks County. Original plan includes ways to interchange between the PA Turnpike and I-95, but federal funds were not permitted to be used to directly connect an Interstate highway to a toll road, under federal laws and regulations of that period. (The federal laws have since been modified to permit such a project.) 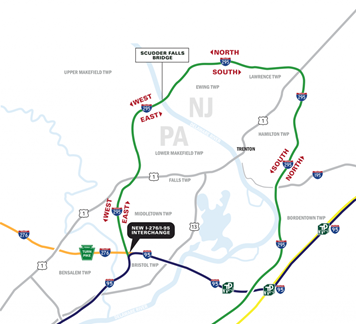 Construction of the new PA Turnpike/I-95 Interchange has allowed planned implementation of the 1982 Surface Transportation Assistance Act (STAA) provision, where I-95 in Pennsylvania is now redesignated through the new Interchange with I-276 (PA Turnpike), east along the PA Turnpike, across the Delaware River Bridge of the NJ Turnpike Connector to New Jersey, east along the connector to NJ Turnpike Exit 6 and then north along the NJ Turnpike. The previous section of I-95 north of the new Interchange continues to serve interstate traffic and be maintained to Interstate standards, but required a new route designation.

For additional information on the redesignation and associated timing, please go to i95link.com.

What is the Project Schedule?

In 2010, the PA Turnpike/I-95 Interchange Project was split into three stages. The majority of Stage 1 is already complete, and all components of Stage 1 construction will be complete in 2021. Stage 2 is not currently funded, but final design has continued on some Stage 2 contracts. Construction of these sections depends on project funding availability, traffic patterns and needs as a result of Stage 1 improvements. Stage 3 is also dependent on funding and will likely not begin construction until after 2025.

Stage 1 work has included the construction of environmental mitigation sites, advance and work zone Intelligent Transportation Systems (ITS) deployments, the replacement of four mainline overhead bridges (three over the Turnpike and one over I-95), the construction of new toll plaza facilities: Neshaminy Falls toll plaza in Bensalem and a new Cashless Tolling Point (Delaware River Bridge toll plaza westbound), flyover ramps connecting I-95 to the Turnpike with associated highway widening (I-95 mainline movements), and the Delaware Valley Interchange Connector Ramp reconstruction and new at-grade intersection with Route 13.

Stage 3 work includes reconstruction of the existing bridge over the Delaware River between Pennsylvania and New Jersey.

Ramps accommodating the movements listed above were included in the Interchange Projects preliminary design. However, when the project was restaged in 2010 due to funding constraints, only the two (2) primary movements connecting I-95 northbound to I-276 eastbound and I-276 westbound to I-95 southbound were progressed through final design as Stage 1. These are the two (2) movements that were opened on September 22, 2018.

Although the ramps accommodating the movements listed above will not be constructed at this time, once funding becomes available for Stage 2, final design on these ramps can proceed, and they can be constructed.

Is there a plan for sound barriers?

If the noise studies indicate that noise walls are warranted, feasible and reasonable, the Pennsylvania Turnpike Commission (PTC) and the design team will meet with the individual communities during final design to discuss location, height, and aesthetic treatments for the noise walls. The selected noise walls will not be constructed until the associated adjacent Turnpike widening occurs.

Is stormwater management included in the design plans?

The Design Team continues to coordinate with the appropriate environmental agencies regarding stormwater management. The stages of this project will adhere to the latest local and state government guidelines for controlling runoff from the project. Also, wetland restoration and stream enhancement has taken place to mitigate for project related impacts.

How will construction of this project affect local road conditions, including road closures and detours? How will traffic be impacted on the PA Turnpike and I-95?

At least two lanes of traffic in each direction on the PA Turnpike and I-95 will remain open throughout the entire construction period, with the exception of limited planned nighttime and required off-peak lane closures. The construction of six of the seven overhead structures has been completed. New Falls Road Bridge will be closed and detoured from June 2020 through August 2021. See the Travel Advisories page for more information.

Now that the PA Turnpike/I-95 Interchange is complete, do I have to pay a toll when traveling north or south on I-95?

Vehicles traveling from New Jersey to Pennsylvania are required to pay a one-way vehicle-based toll for crossing the bridge over the Delaware River. This toll is collected via the Turnpikes new Cashless Tolling system. Vehicles crossing the bridge over the Delaware River from Pennsylvania to New Jersey are not charged. Now that the flyovers are complete, motorists can travel between the PA 413 and US 13 Interchanges toll free in both directions.

How has the roadway numbering been redesignated since the opening of the flyovers?

I-95 in Pennsylvania has been routed from the new Interchange with I-276 (PA Turnpike), east along the PA Turnpike, across the Delaware River Bridge of the NJ Turnpike Connector to New Jersey, east along the connector to NJ Turnpike Exit 6 and then north along the NJ Turnpike. The original portion of I-95 north of the PA Turnpike has been redesignated as I-295 East/West to the PA/NJ State Line (Scudder Falls bridge), where I-295 changes to a North/South state route. Additional information about the redesignation can be found at i95link.com.

What is cashless tolling?

Cashless tolling allows all customers to pay without stopping at tollbooths. The PA Turnpike Commission introduced cashless tolling on the PA Turnpike system in one location in January 2016. This tolling point, westbound over the PA Turnpike Bridge at the Delaware River, does not accept cash, but instead uses two easy payment options: E-ZPass or PA Turnpike TOLL BY PLATE. More information can be found at All-Electronic Tolling.

No. The only new interchange associated with this project is the newly opened highway speed interchange between I-95 and the PA Turnpike. Interstate access to the local road system will still be via the existing Turnpike and I-95 interchanges in the project area.

Do I really have to slow down when I'm driving through the construction zone?

Yes! When traveling through the project, the speed limit is posted at 55 miles-per-hour (mph) in both directions. This is for the safety of the traveling public and for the safety the workers along the roadside.

More information on the penalties for speeding through the work zones can be found here: www.operationorangesqueeze.com.

Will there be work at night?

Yes. Based on the significant volume of work needed to complete the project on time, there will be occasional work at night. This type of work includes heavy machinery and multiple light trucks/devices. Additionally, as part of the contract for this and all Turnpike projects, all construction work requiring lane closures is predominantly conducted at night to accommodate the heavy volume of daily commuters on the Turnpike.

Who can I speak to about impacts to my property (i.e. standing water, fencing, vegetation, debris)?

If you have questions or concerns about the construction project, you can contact Jacobs Engineering, the Design Manager, at 215-355-3577.

Are precautions being taken to prevent the breeding of mosquitoes in the standing water areas in the construction zone?

Yes. When necessary, the PTC will initiate preventative measures during the summer construction months to inhibit the breeding of mosquitoes in the standing water areas within the construction zone. The brand of mosquito extermination product that will be used has been approved by the Bucks County Conservation District. The bacterium in the product effectively eliminates mosquito larvae, yet is harmless to other living things including pets and wildlife. This mosquito treatment will be used only on the temporary sedimentation basins within the construction zone and only during the construction phase. Once complete, the permanent stormwater basins within the project area are designed to regularly release water before mosquitoes can breed. Therefore, the permanent basins will not require preventative mosquito treatment.

Who should I contact about providing supply materials or about employment opportunities related to the construction project?

This project is being built by construction companies under contract to the Pennsylvania Turnpike Commission. As such, all construction or material-related inquiries should be made to the contractor(s).
New Falls Road: Allan Myers
Route 13 Connector: James D. Morrissey, Inc.
Stage 1 ITS: Miller Bros.