August 1-14, we’re showing our appreciation for all Turnpike drivers. And in a big way.

The Big Thanks Sweepstakes Giveaway is now closed. Winners will be chosen at random and notified. 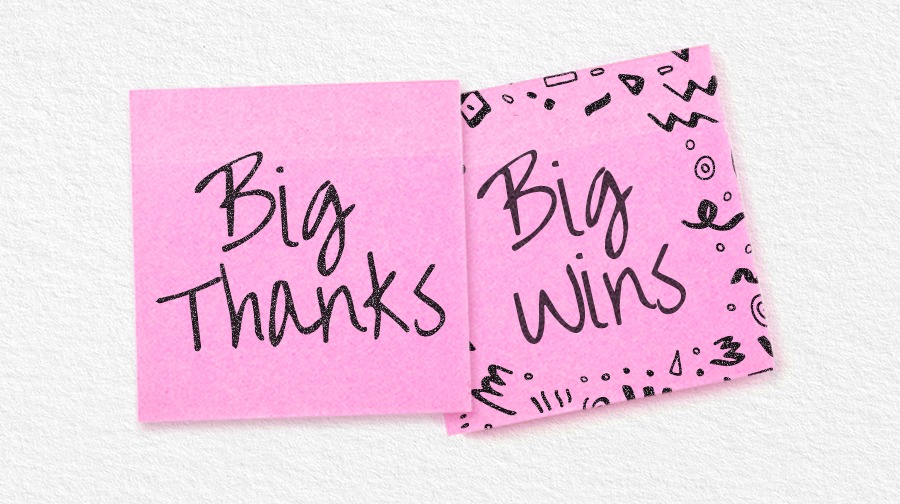 From IT to Maintenance, Engineering to HR, Turnpike employees say "Thanks!"

1. ELIGIBILITY. The Pennsylvania Turnpike Commission (“Sponsor”) “Big Thanks Sweepstakes” (the “Promotion”) is open only to those who, as of the start date, are legal residents of the fifty (50) United States, including the District of Columbia, and who have reached the age of majority in their state of residence. The Promotion is void where prohibited or restricted by law. Employees, officers, and directors of Sponsor and its advertising and promotion agencies involved in the administration of this Promotion, and the immediate families (defined as parents, spouses, children, siblings, grandparents and their respective spouses) or members of the same household (whether related or not) of each such employee, officer and director), are not eligible to enter.

3. HOW TO ENTER. To enter, go to https://www.paturnpike.com/traveling/giveaway and follow the instructions for entering.

Limit of one (1) entry per person. Multiple entries, mass entries, and entries generated by script, macro, or other automated means or by any means that subvert the entry process will be void.

Complete all requested information during the entry process in accordance with the on-screen instructions. You must complete all required information to be eligible to win. All entries must be received by Sponsor during the Entry Period. Any attempt by any participant to obtain additional entries beyond the limit by using multiple/different email addresses, identities, registrations, or any other methods will void that entrant’s entries and that entrant may be disqualified. Use of any automated system to participate is prohibited and will result in disqualification. Sponsor is not responsible for lost, late, incomplete, invalid, void, unintelligible or misdirected entries, which will be disqualified.

In the event of a dispute as to an entrant’s entry, the natural person who is the authorized account holder of the email address will be deemed to be the entrant, but only if that person is otherwise eligible to enter the Promotion. The “authorized account holder” is the natural person assigned to an email address by an Internet access provider, online service provider, Internet service provider, or other organization responsible for assigning email addresses for the domain associated with the submitted address. Each potential winner may be required to show proof of being the authorized account holder. If a dispute cannot be resolved to Sponsor’s satisfaction, the winning entrant may be deemed ineligible. All entries become the exclusive property of Sponsor and none will be acknowledged or returned. Proof of submission will not be deemed proof of receipt of entry by Sponsor.

4. AGREEMENT TO OFFICIAL RULES AND DECISIONS. By participating, each entrant fully and unconditionally agrees to be bound by and accepts these Official Rules, and the decisions of Sponsor (including, without limitation, decisions regarding eligibility of entries, the selection of entrants and the winner, and the awarding of the prize), which are final and binding in all respects.

6. PRIZE(S). Two prize(s) will be awarded in this Promotion: the Hershey Park Family Fun Pack (approximate retail value of this prize is approximately $395.00); and the Penn State Fanatics Pack Plus (approximate retail value of this prize is approximately $265.00). Prizes must be accepted as awarded, and the prizes are awarded “AS IS” with no warranty, representation, or guarantee, express or implied, in fact or in law, made by Sponsor or for which Sponsor shall be liable, including, without limitation, ANY IMPLIED WARRANTIES OF MERCHANTABILITY, NON-INFRINGEMENT OR FITNESS FOR A PARTICULAR PURPOSE. No substitution, assignment or transfer of a prize is permitted, except by Sponsor, who reserves the right to substitute a prize with another prize of greater or equal value, in the event of unavailability of the advertised prize. Winner is solely responsible for any and all costs, fees, taxes and expenses associated with prize award, receipt and use, including, without limitation, all federal, state and local taxes on the prize. For prizes valued over $600, prize winner will be issued an IRS Form 1099 for the retail value of the prize. If potential winner does not wish to accept the prize, an alternate winner will be selected from the pool of eligible entrants. All details of the prize not set forth herein will be determined by Sponsor in its sole discretion. All entrants and entries are subject to verification prior to the awarding of a prize, as are the eligibility, age and other claims of/information provided by a potential prize winner.

7. PUBLICITY. Except where prohibited by law, participation in the Promotion constitutes winner’s consent to Sponsor’s (and its designees’, successors’ and assigns’) use of winner’s name, biography, likeness, voice, photographs, video, opinions, statements, hometown, state and country for promotional purposes in any manner or media (including, without limitation, online), worldwide, in perpetuity, and without further payment, consideration, notice, review or consent.

8. GENERAL CONDITIONS. Sponsor reserves the right, in its sole discretion, to terminate, modify or suspend the Promotion if, in Sponsor’s opinion, there is any suspected or actual evidence of electronic or non-electronic tampering with any portion of the Promotion, or if viruses, bugs, unauthorized intervention, fraud, technical difficulties or failures or any other factor beyond Sponsor’s reasonable control corrupt or affect the administration, security, fairness, integrity or proper conduct of the Promotion. In such event, Sponsor reserves the right (but does not have the obligation) in its sole discretion to award the prize at random from among eligible, non-suspect entries received up to the time of suspected impairment. Sponsor reserves the right in its sole discretion to disqualify any individual it finds to be tampering with the entry process or the operation of the Promotion or to be acting in violation of these Official Rules or in an unsportsmanlike or disruptive manner. Any attempt by any person to deliberately damage any website or undermine the legitimate operation of this Promotion is a violation of criminal and civil laws, and, should such an attempt be made, Sponsor reserves the right to seek damages and other remedies from any such person to the fullest extent permitted by law. Sponsor’s failure to enforce any term of these Official Rules shall not constitute a waiver of that provision or any other provision of these Official Rules.

9. RELEASE. By entering the Promotion, each entrant forever, fully and irrevocably releases and holds harmless Sponsor and its Commissioners and employees, and their respective advertising and promotion agencies, affiliates, Promotion partners and prize suppliers, and Facebook, Instagram, Twitter, and all of their respective employees, officers, directors, shareholders and agents from and against all claims, damages or liabilities arising in whole or in part, directly or indirectly, from entrant’s participation and/or entry in the Promotion and/or entrant’s award, receipt or use of any prize awarded in the Promotion. In no event will any entrant be entitled to rescind this agreement or seek injunctive or any other equitable remedy.

10. LIMITATIONS OF LIABILITY. Sponsor is not responsible for: (a) incorrect or inaccurate transcription of entry information or late, lost, stolen, unintelligible, illegible, damaged, mutilated, altered, incomplete or misdirected entries or entries received through impermissible or illegitimate channels, all of which will be disqualified; (b) technical failures of any kind, including but not limited to the malfunctioning of any telephone, computer online systems, computer equipment, website, server provider, network, hardware or software; (c) the unavailability or inaccessibility of any website or service; (d) unauthorized intervention in any part of the entry process or the Promotion; (e) printing, typographical, electronic or human errors, which may occur in the offer or administration of the Promotion or the processing of entries; or (f) any injury or damage to persons or property, including but not limited to entrant’s device, which may be caused, directly or indirectly, in whole or in part, from entrant’s participation in the Promotion, or from viewing, playing or downloading any material from Sponsor’s website, regardless of whether the material was prepared by Sponsor or a third party, and regardless of whether the material is connected to Sponsor’s website by a hypertext link.

11. DISPUTES. As a condition to entering the Promotion, entrant agrees that: (a) any and all disputes, claims and causes of action arising out of or connected with this Promotion, or any prizes awarded shall be resolved individually, without resort to any form of class action, and solely and exclusively in a federal or state court located in the Commonwealth of Pennsylvania; entrant submits to sole and exclusive personal jurisdiction to the courts in the Commonwealth of Pennsylvania for any such dispute and irrevocably waives any and all rights to object to such jurisdiction; (b) any and all claims, judgments, and awards shall be limited to actual out-of-pocket costs incurred, but in no event attorneys’ fees; and (c) under no circumstances will entrant be permitted to obtain awards for and entrant hereby waives all rights to claim punitive, incidental, consequential, and any other damages, other than for actual out-of-pocket expenses, and any and all rights to have damages multiplied or otherwise increased. SOME JURISDICTIONS DO NOT ALLOW THE LIMITATION OR EXCLUSION OF LIABILITY FOR INCIDENTAL OR CONSEQUENTIAL DAMAGES, SO THE ABOVE MAY NOT APPLY TO YOU. All issues and questions concerning the construction, validity, interpretation and enforceability of these Official Rules, or the rights and obligations of entrant or Sponsor in connection with the Promotion shall be governed by, and construed in accordance with, the laws of the Commonwealth of Pennsylvania, without giving effect to any choice of law or conflict of law rules of provisions (whether of the Commonwealth of Pennsylvania, the United States, or any other jurisdiction), which would cause the application of the laws of any jurisdiction other than the Commonwealth of Pennsylvania.

12. DATA COLLECTION. Information collected in this Promotion will be administered by Sponsor in accordance with its Privacy Policies, located at https://www.paturnpike.com/about-us/policies-standards/privacy-policies.

13. OFFICIAL RULES. These Official Rules are available at www.paturnpike.com.