Project Summary: Total reconstruction and widening to three lanes in each direction from the Fort Littleton Interchange to the Tuscarora Tunnel.

As part of the Pennsylvania Turnpike Commission (PTC) $2 billion total-reconstruction program, $150 million is planned for investment in the six-lane widening of the Turnpike between the Ft. Littleton Interchange at Milepost 180 in Dublin Township, Fulton County and Milepost 186 in Dublin Township, Huntingdon County, just west of the Tuscarora Tunnel.

Preliminary Design was completed in the Spring of 2015. This work determined the impacts to utilities, local road and stream crossings, and properties adjacent to the Turnpike. Final Design began in the Summer of 2015 and has currently been suspended due to coordination with other projects and available funding. The project will include the reconstruction of the existing roadway to accommodate six 12-foot travel lanes with 12-foot left and right shoulders and a 2-foot median barrier as well as the flattening of several existing substandard horizontal curves. In addition, this project will require the replacement of 5 mainline bridges carrying the Turnpike traffic over the local roads. One of these structures, a private drive under the Turnpike mainline, will be changed to an overhead bridge for the private drive to cross over the Turnpike. 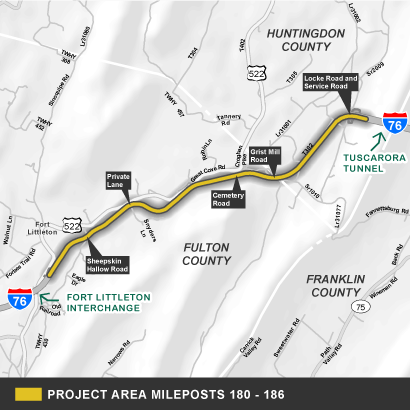