Preliminary Design began in Spring 2012 on the future reconstruction and six-lane widening of the Pennsylvania Turnpike (I-76) between mileposts 316 and 319. The project begins just west of the Valley Hill Road overhead bridge (Milepost 316) and extends east to the the Route 29 Interchange (Milepost 320). The four-mile project corridor lies in Charlestown Township in Chester County.

This project is in Final Design and upon completion will upgrade the existing four-lane facility to a six-lane facility (three 12-foot travel lanes westbound and three eastbound) with 12-foot inside and outside shoulders. Between 2010 and 2013, two overhead bridges, Valley Hill Road (SR 1021) and Yellow Springs Road were replaced within the project limits. Construction for the mainline reconstruction project is to be determined.

Open House Plans Display:
Held on May 8, 2014 at Great Valley Middle School
Click here for more information and copies of the display materials. 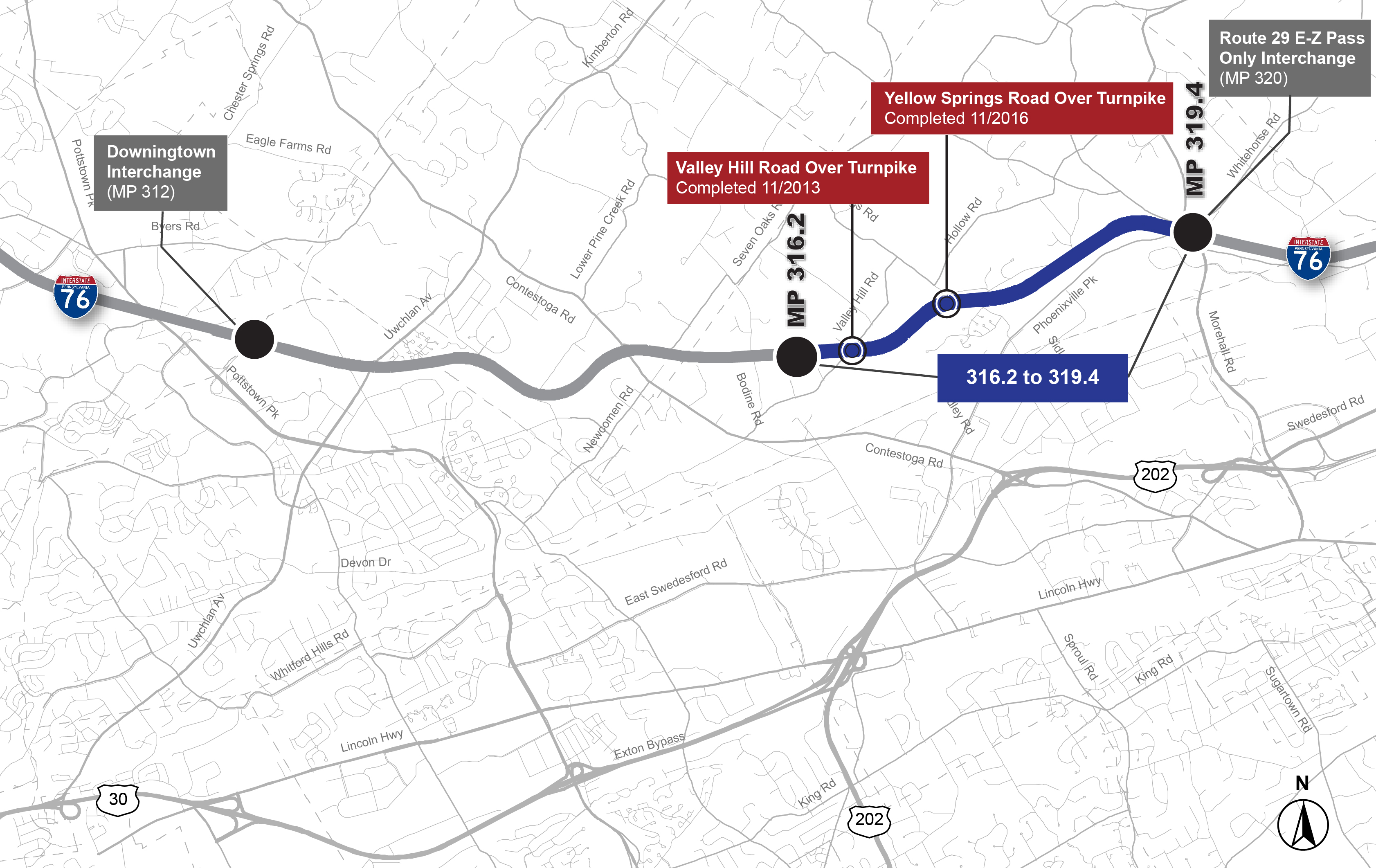 Why is this project being built?

This project is part of the Pennsylvania Turnpike Commission’s statewide total reconstruction initiative which entails rebuilding sections of the 60-plus-year-old Turnpike facility from the ground, up. The new roadway design meets current interstate design standards, and will provide a safer and more efficient travel experience for Turnpike customers. The existing pavement conditions, current traffic volumes and projected growth dictate widening the mainline from four to six lanes.

Are the locations of the noise walls as shown on the mapping final?

How did you determine where the noise walls are located?

For communities where noise abatement consideration is warranted, the next step is to consider whether the noise abatement would be feasible for each affected community. Traffic noise abatement is typically provided by using highway noise barriers. Feasible noise barriers are those that provide at least 5 dB(A) of noise reduction to noise sensitive locations and pose no safety, engineering, or access restrictions. If a noise barrier system is determined to be feasible, the next step is to determine whether or not the barrier is reasonable for construction. For a barrier to be reasonable it must be cost effective and maintenance, constructability, drainage and utility impacts, as well as the desires of the affected residents, must be considered.

The noise walls will consist of concrete panels with steel or concrete posts. The panels utilize a form-liner to provide texture and a stain is applied for color. Anti-graffiti coatings are added in an effort to reduce the possibility of unsightly graffiti. The PTC is planning to hold a community meeting with the owners of property bordering proposed noise wall locations to provide them with the opportunity vote on noise wall color and texture.

When will the noise walls be built?

Where can I view the Noise Impact Analysis report?

A copy of the report can be found in the News and Public Involvement section of this project website.

What are you doing to protect the environment?

In addition to coordinating with the local townships, the PTC is working with local, state and federal regulatory agencies such as the Department of Conservation and Natural Resources, the Pennsylvania Department of Environmental Protection, Pennsylvania Fish and Boat Commission, and the US Army Corps of Engineers as well as local special interest groups to make sure the project design progresses with the least impact to the environment. The entire project is located in 3 different High Quality watersheds and 1 Exceptional Value Watershed. These types of watersheds are waters of special protection requiring an increased level of effort for permitting.

If the Turnpike Commission still needs to acquire all or part of my property (business or residence) for the project, what should I know about the right-of-way acquisition process?

When will I know for sure whether or not my property will be affected?

The proposed plans that were presented at the May 8, 2014 Open House Plans Display are preliminary and about 30% complete. They reflect the most accurate representation of property that will need to be acquired to construct the project according to plan. There may be modifications that occur as we complete the final design phase.

How will the public know when construction starts, and if there will be detours?

The PA Turnpike Commission has provided a number of ways to keep the local community up to-date with current project activity. Information will be publicized in local newspapers via advertisements. The PA Turnpike Commission also routinely updates your local legislators and township officials with the most recent information. The project website is frequently updated with current project activity. In addition, electronic E-Bulletins are used to provide the public with the latest project news. NEXT, the project newsletter is another way to receive project information. You can sign up for E-Bulletins and NEXT at the Public Outreach Station tonight or on the project website on the “Contact Us” page if you would prefer to wait.

How is this project funded?

The project is funded entirely by Turnpike toll revenue and has no federal funds or state tax dollars involved.

How much will this project cost?

Does the PTC expect to continue widening to the east and west?

The PTC’s goal is to widen the entire Turnpike to 6 lanes. There are currently active projects east and west of this project.