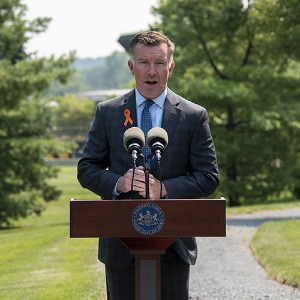 HARRISBURG, PA. (JULY 28, 2021) — The PA Turnpike Commission (PTC) today delivered its final $450 million payment to PennDOT for transit systems around the state, as mandated by Act 44 of 2007, bringing the total transferred over the last 15 years to $7.9 billion. The payments have driven significant annual toll increases and deep cuts to the Turnpike’s capital plan to rebuild and expand its aging system.

“Today we are making our last annual payment of $450 million to PennDOT,” said PA Turnpike CEO Mark Compton. “This marks our final major payment to PennDOT, but it also marks our next, unburdened, step into our financial future.

“Our $7.9 billion of payments over 15 years have supported highways, bridges, public transit services, and associated facilities that benefit Pennsylvanians in every county. The commission and our customers have done our fair share to support ground transportation statewide, but we now look forward to returning focus to our own system and investing in its future.”

Under Act 89 of 2013, the PTC’s payment drops from $450 million annually to $50 million at the end of this current fiscal year; at that time, $450 million for transit will come from the state’s General Fund. Lawmakers will have to address this shift in the next state budget, explained Deputy Secretary Granger.

“These investments have helped communities across the state, but as per Act 89, the funding source will shift from the PTC to the use of vehicle sales tax revenues, specifically the Commonwealth's Motor Vehicle Sales and Use Tax,” Granger said. “We have more projects and services that need to become reality, and we will continue working with our partners on sustainable, long-term revenue options.”

“With about 200 million vehicles on our roadway each year, our greatest obligation is to ensure safe travel for our customers and keep this roadway in good working order,” Chief Engineer Heigel explained. “While we regularly outpace national standards in safety, quality, and mobility, this became extremely challenging under the financial obligation mandated by Act 44 which caused us to defer adding new capacity including more lanes and new interchanges.

“In essence, we could only focus on what we call ‘protection’ projects, which are those that maintain the roadway and shelve, for the most part, our ‘performance’ projects which are those that improve upon our system. These limited methods don’t last as long as true long-term reconstruction.”

Heigel highlighted several critical projects that were deferred because of the Act 44 payments. Now, the PTC can start to get back on track with its investments to completely rebuild and widen sections of its roadway — some of which are turning 81 years old this fall — starting with a two-mile segment in Chester County. Other major projects gradually being added back into PTC plans include various tunnel improvements, the Delaware River Bridge, Hawks Falls Bridge and Beaver River Bridge replacements as well as several new interchange projects.

Due mainly to Act 44 payments, the commission today has $14 billion in total debt, which matches the Commonwealth’s General Obligation debt.

“We have managed the debt placed upon us by making smart borrowing decisions, reining in spending to the most critical of projects and controlling our operating budget,” explained Chief Financial Officer Dreher. “While we are moving on from this obligation, like anyone who must borrow to cover a big expense like a home or education, we must continue paying the debt service for 30 years. Admittedly, that’s a long road, and unfortunately, our customers will not feel direct toll relief. But our annual toll increase will be less and less as we progress through our debt.”

Earlier this month, the commission announced a 2022 toll increase of 5 percent — slightly lower than the 6 percent increases that approved every year since 2016. Due to the commission’s massive debt, incurred mainly to fund the Act 44 payments, tolls will increase for the foreseeable future, but those annual increases, which are based on current traffic and revenue projections, will be reduced to 3 percent by 2028.

“By returning control of our finances, the commission can invest in our system which means rebuilding and bettering our roadway as well as adding new access points and supporting the economic development that often follows,” concluded Compton. “We will continue to participate in efforts such as the Mobility Partnerships and the Transportation Revenue Options Commission to assist the Legislature, Stakeholders and PennDOT in their efforts to find a sustainable funding source for the Commonwealth’s ground-transportation systems.”

*Rates are based on traffic and revenue projections.

*Increases are implemented the first Sunday of January.